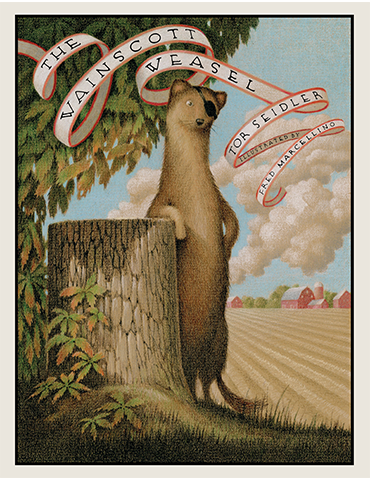 The Wainscott Weasel
Illustrated by Fred Marcellino | Published by HarperCollins

Fish, foxes, farmers, and frogs, seagulls, sparrows, and swans, turtles and terns—the ponds and fields and woods of Wainscott are home to all sorts of creatures. But the most remarkable citizens of this seaside community are the weasels: Zeke Whitebelly and his boisterous brothers; Wendy Blackish, who’s come to summer with her aunt and uncle; Bagley Brown Jr., the lonely son of a famous father. While the other young weasels dance under the pines, Bagley thinks about Bridget, the mesmerizing fish who lives in a pond down the brook from his den. Only a true hero can save Bridget from the gruesome death that awaits her—and that is exactly what Bagley, much to his own surprise, proves himself to be.