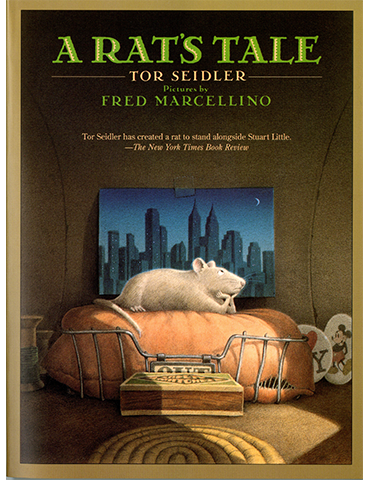 A Rat's Tale
Illustrated by Fred Marcellino | Published by Farrar, Straus and Giroux

Montague Mad-Rat lives a solitary existence in the sewers of New York City. His only pleasures are scavenging in Central Park for feathers and berries for his mother, and painting the seashells his aunt brings him. But when he rescues the beautiful Isabel Moberly-Rat and escorts her home, he is introduced to a world he never knew existed. She lives on a wharf, in a spacious crate, among rats who look down on those—like him—who make things with their paws. Suddenly Montague is ashamed. So when he hears about the campaign to save the wharves from human destruction, he does all he can to help. But how much can one outcast rat do?